Scientists have figured out why dogs love to eat meat and gnaw bones. When dogs began to live and hunt in groups, their diet changed. Animals adapted to a pack lifestyle about 8 million years ago in order to hunt larger prey.

As a result of the evolution of their jaws, the ancestors of our domestic dogs gradually turned into hyperpredators. The researchers tried to compile a “canine family tree” by linking together relationships between more than 300 canine species. This map of canine evolution shows roughly when a particular species appeared, allowing scientists to understand how lifestyles and habits were related to the shape of the animal’s skull.

“We compared species in the canine family and found that they have different diets,” said Dr. Joao Munoz-Doran. “So we divided them into carnivores, hyperpredators and omnivores.” 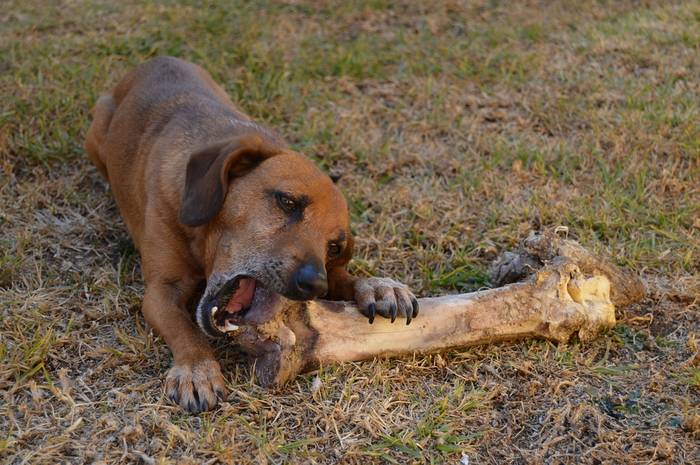 Analyzing hyperpredators, among which was the closest relative of dogs, the gray wolf , scientists found that strong jaw muscles and large teeth began to develop precisely at the time when the animals only began to hunt in groups.

8 million years ago, Asia, Europe, and North America had fewer forests and more open spaces. In such an environment, the animals hunted by the ancestors of dogs gathered in groups to make it easier to spot the enemy and fight back. As a result, canids began to do the same, and gradually they developed a special form of skull.

Animals with larger teeth and stronger jaws were more likely to hunt successfully to survive, so they began to pass on their characteristics from generation to generation. Their muscles, especially those near their mouths, have become stronger and their bones stronger to grip their prey firmly with their teeth. Over time, they became hyperpredators, that is, their diet consisted mainly of meat.

Scientists also reported that the domestic dog retained these features of its ancestors and also loves to gnaw bones. “They have the right tools for this and they want to use them,” Munoz-Doran said.